Nurturing the next generation of business leaders will be the theme of the chamber's 101st annual breakfast, Nov. 10 at the Newton Marriott Hotel.
Babson College President and former Massachusetts Lt. Governor Kerry Healey will deliver the keynote address and WGBH's Jim Braude will be our emcee.
Internationally recognized for nearly three decades of service in academia, government and humanitarian work, Healey served as lieutenant governor from 2003-07, where she co-chaired the state's Regional Competitiveness Councils and partnered with then-Gov. Mitt Romney to craft the state's first-in-the-nation health care reform legislation.
In 2008, she was appointed by then-Secretary of State Condoleezza Rice -- and later re-appointed by then-Secretary of State Hillary Clinton -- as a founding member of the U.S. State Department's Public-Private Partnership for Justice Reform in Afghanistan. In 2010, Healey created and hosted "Shining City," a television series showcasing cutting-edge scientific and social innovation for NESN.
Healey became president of Babson, which is widely recognized as most top entrepreneurship college in the nation, in 2013.
The chamber's annual breakfast has sold out for the past three years with 500 attendees expected. 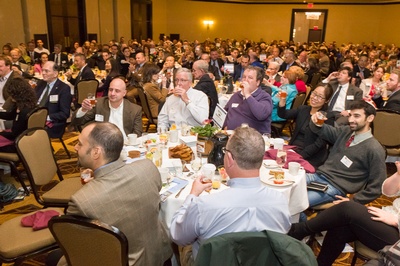