Newton Community Farm, Inc., a nonprofit organization that runs the last working farm in Newton, welcomes Paul Holt as the new president of the board of directors. Paul has served on the NCF board since October 2019 and he brings a wealth of knowledge in business, fundraising, and community relations. He has enjoyed the Farm as a CSA sharer and volunteer. Paul is also on the board of Green Newton and Friends of Newton Tennis.

Professionally, Paul was the former CEO of a technology systems integrator company which he sold in 2005. He went on to become a major gifts fundraiser for Northeastern University, the American Red Cross, and Big Brothers Big Sisters before retiring in 2018. Paul and his family have lived in Newton since 1993. He replaces Stephanie Cogen whose term ended this winter after being board president for the previous six years. 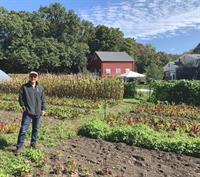